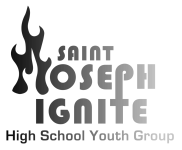 Stacy's (and hopefully teens!) thoughts on our Catholic Faith and Life!
Powered by